Saturday morning, a few months ago. Sipping my coffee and enjoying my bagel, I flipped the page in New York magazine and almost choked on the last bite. Having been a huge Bond fan since my early childhood - Dr. No was the first I ever saw; and the images of Ursula Andress collecting sea shells at the beach have stuck with me ever since - I was taken aback by the ad in front of me. I almost dropped my coffee mug as well.

PREMISE:
The Bond franchise has been cultivated for decades and has created a rare cinematic phenomenon, that - if managed the right way - can provide for all of the Albert Broccoli's descendants for decades to come. There have been mistakes, bad choices in actors (George Lazenby or Timothy Dalton), there have been good Bonds and bad Bonds, good product integration (Aston Martin) and bad product placement (Ford Fiesta), but overall the Bond brand is pretty clearly defined, at least in my mind. It is (in random order): classy, sophisticated, elegant, smart, intelligent, exciting, dangerous... you'll get the idea. So everything you roll out with the 007 / James Bond name attached to it should look or feel the same way, no? Let's take a look at both the ad, and the idea.

THE PRINT AD
Other than the tag line "Dangerously Sophisticated", nothing in this ad is. Neither dangerous. Nor sophisticated. This is one of the cheapest advertising executions I have ever come across in my entire career. Why? Here are a few reasons why:

A) Where is Bond? Was Daniel Craig too expensive? Was he perhaps not convinced that this perfume roll-out was a good idea? Or does he have a non-compete agreement in place for another fragrance he is endorsing? So instead of actually showing Bond, they give us... a nobody without a face. WTF?! It is not only cheap, since you don't have to pay this actor / model guy much money as his face is not recognizable, but it is also bad, because everyone and their brother can tell that this guy is not Bond, but an impostor.

B) The Setting / Background. There is none. They put him against a white background, with a graphic element of the barrel of a gun. Again: wtf?! This should have been shot with Bond sitting at the bar at the Macao hotel in Skyfall and his female counterpart in her seductive dress next to him. Or Bond walking into the casino, a scene so strong and powerful, it carries the quintessential Bond DNA in one image (see bottom of this post). That scene alone evokes a million emotions. The one above does not.

C) The watch. Look it up. A gentleman does not wear a tuxedo with a chronograph with a metal wrist band. Never. Ever.

D) The product name. There is none! They just call it '007'. Either they were lazy, or they were bad executioners of the idea, this product needs a name. One such as 'CONVICTION' or 'CREED' or the like.

So far for the ad. I seriously can't find one good thing about it. It certainly does not make me even want to try to smell it.

THE IDEA
If I were to roll out an idea about a 007 perfume, the first question I'd ask myself is: which perfume would James Bond actually wear? Armani? Versace? Tom Ford? Gucci? Prada? That's where I would start. That is what I would define as the bench mark. Scent, bottle design, advertising - it all has to be up to par. Nothing less. Just look at the design of the bottle: it is just so... cheap... and the opposite of what Bond stands for.

Going even back one step, before executing the idea I would ask myself: is this actually a good idea? If not sure, I would test it among consumers. I am sure James Bond has done a lot for Omega Watches. But would it have worked for '007 Watches'? Probably not. Successful merchandising has to be planned by smart people making smart decisions. This concept to me seems half-baked, ill-fated, and looks / feels like a cheap copy made overseas sold to me on Canal Street in Chinatown, not like official 007 merchandise. I am sure that is not what the people at Danjac, LLC, the official holding company for copyright and trademarks of all Bond related elements had in mind.

MAD SCORE: -4
Message: -1, there is none other than the boring 'The new fragrance for men'.
Creative: -1, poor idea, badly executed
Context: -1, not at all aligned with the movie launch of Skyfall
Impact: 0, because Michael "The Situation" Sorrentino from the Jersey Shore cast might actually buy a bottle
Intangibles: -1, there are none, which is very sad

How about this image instead for an alternate ad? Imagine the bottle and the logo in the lower right corner. Done. 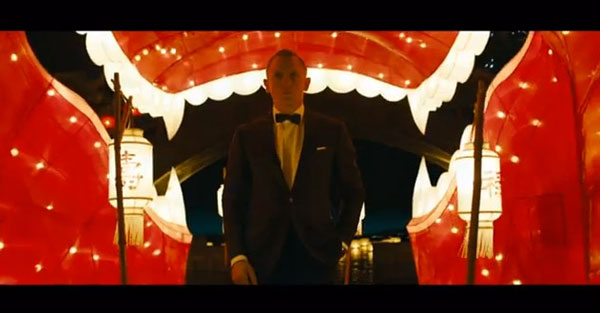 
These painted outdoor murals have been the latest hot thing to do in outdoor advertising for the last two years. In Hipster Brooklyn Williamsburg they are everywhere: Vans, Converse, Levi's etc. The approach is pretty clear: by doing something unusual, something different you are positioning your brand as unusual / different / off mainstream.

But Microsoft? I can't stop laughing. The brand is so mainstream commercial, mass market, that this ill-fated attempt can only be described as laughable. Bad enough that Microsoft tries to position the Surface as cool, and hip, and energetic, and awesome, and god knows what - those TV commercials with all the people dancing and clapping and flipping and shaking are still causing seizures just by thinking of it - but an outdoor mural? What half-brained media planner / marketing manager signed off on this?

Sure thing, Microsoft's advertising dollars are plenty and in the multi millions, and a miss like this sure won't hurt them and is merely a drop in the bucket of what they spend, but I doubt that the advertising effectiveness of this mural is anywhere else but ZERO. Why? Here are the reasons:

A) The New York downtown crowd is very much anti main stream. They barely venture across 14th Street. And do you know where they hang out? Exactly, at the Apple Store. They wouldn't touch a Surface with a pair of pliers.

B) That leaves the tourists as the audience. Be assured most of them are not from New York, and can probably be targeted via traditional advertising. A more mainstream billboard on Times Square will be so much more effective getting to them. Plus, Times Square is where all of them go. Houston Street will get you a fraction.

C) The creative execution. Don't even get me started. This is so awfully bad and poorly done. What is the point of this mural? A six year old child can draw a better tablet / computer  / laptop. This does absolutely nothing. I don't even know what the message is here. It would at least have been a fraction of cool if they had left the damn 'Microsoft' logo off, so people will ask themselves 'What is Surface'? and might go home and google it. But this? I can't stop laughing. Someone should get fired for this.

A great campaign is a piece of art, successfully blending business acumen and artistic sense with cultural relevance. But only 5% of what's out there is actually very good. The majority is mediocre, and a surprisingly huge amount is just very bad. I’m here to tell the good from the bad, and the ugly.

A PIECE OF WISDOM

IRS - We've got what it takes to take what you've got

PREVIOUSLY ON THE MAD AD MAN

All written content, unless otherwise noted, is copyrighted by the author. No part of this site, or any of the content contained herein, may be used or reproduced in any manner whatsoever without expressed permission of the author.